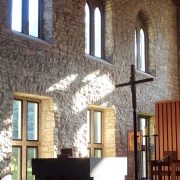 The Trappist monks, belonging to the Order of Cistercians of the Strict Observance, share a rich history that spans sixteen hundred years. From arid Egyptian deserts to green pastures of Ireland, monks have prayed, studied, and worked together for centuries.

After the fall of the Roman Empire and the ensuing period of unrest in the early Catholic Church, monasticism, became increasingly popular. By the sixth century, St. Benedict emerged as a prominent figure for early monks when he compiled a set of rules for how the holy men should live. Gradually, the Rule of St. Benedict became widely accepted, spreading throughout Europe as a standard of monastic way of life.

After centuries of growth and interpretation, some monks grew lax, indulging too often in corporeal comforts and the pursuit of power. In 1098 a group of monks founded the Abbey of Citeaux in southern France where they sought a return the austere simplicity of Benedict’s Rule. These monks were known as Cistercians, the ancestors of today’s Trappists.

Cistercian founders St. Robert, St. Alberic and St. Stephen believed in a modest lifestyle silenced from distractions of the busy world around them. Continuously growing and seeking devout simplicity, the order experienced renewal over the years. The name “Trappist” comes from La Grande Trappe, a Cistercian monastery in Normandy where a reformation movement took place in the mid-17th century. Reformers were nicknamed Trappists and the name stuck.

In the late 1840’s, Trappist monks from Mount Melleray Abbey in Ireland were plagued by extreme famine. The dire conditions led explorer monks to North America in search of a new monastic site. In 1849 the Irish monks settled on the rolling farm- and timberland of Iowa’s frontier. On this site, near Dubuque, New Melleray Abbey was founded. Despite harsh winters and difficult situations, miraculously the monks persevered to farm the land and build their monastery with limestone they quarried themselves.

One hundred seventy years later, the Trappist monks of New Melleray Abbey continue to live out their humble vocation. Vows of obedience, stability, conversion of life, poverty and chastity are expressed by their daily rhythms of contemplative prayer, community liturgy and manual labor. These are the cornerstones of their calling – from St. Benedict to today.