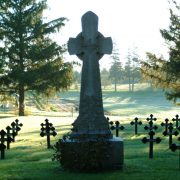 For most of its 2,000-year history, cremation was forbidden by the Catholic Church. This teaching was born of historical context as well as biblical interpretation.

In early times, Romans cremated their dead as a rejection of an afterlife, a direct contradiction to the Christian hope of resurrection. Therefore, cremation was associated with pagans and Christians forbade it in favor of traditional burial.

Drawing on scripture, early Catholics believed what we profess today: We are an incarnational people who believe creation is holy because, “The Word became flesh and made His dwelling among us” (Jn 1:14). God is not somewhere “up there” but within. As God is in us, we are “a temple of the Holy Spirit” (1 Corinthians 6: 19) and the body is to be treated with respect both in life and after death. Because cremation is a destruction of the body, the Catholic Church prohibited it. Only in emergency situations when the quick disposal of bodies was a civil necessity was cremation permissible.

This is no longer the case. Why? The intention of cremation has changed over the years. Though this requires some assumptions and generalizations, many people seem to opt for cremation not because they reject resurrection, but for economic reasons, environmental concerns, sanitation preference, and the like. The leaders of the Catholic Church called The Second Vatican Council in 1963 for spiritual renewal and discussion. Cremation was on the list.

After the reforms of the funeral and burial rites named by Vatican II, the Church took a more relaxed approach, allowing cremation. However, due to confusion in the years that followed, the Church needed to set some guidelines. The Congregation for the Doctrine of the Faith issued a statement of clarity and directive. ‘Cremation does not affect [the] soul, nor does it prevent God from raising up the deceased body to new life.’ If a Catholic chooses cremation, it is required that:

Traditional burial or cremation followed by burial are, according to the Church, the best ways to comply with the dignity we owe the human body. How does this compare to other faiths?

Christians: Most Christian denominations except for Greek Orthodox, allow cremation.

Anglicans/Episcopalians, Baptists, Lutherans, and Methodists: Cremation is allowed before or after the funeral rite.

Presbyterians: Cremation is allowed, but burial is preferred

Jews: Cremation is allowed among Reform Jews but is not allowed for Orthodox Jews who only permit traditional burial

Muslims: Cremation is forbidden to the point of excluding someone from a Muslim burial

Buddhists: Allow cremation; ashes may be kept by the family, enshrined, or scattered at sea

Hindus: Require cremation for all except babies, children and saints

We understand that this is a very personal decision for you or your loved one. Regardless of faith background, all are welcome to purchase our handcrafted wooden urns or caskets as preference or belief permits. Advanced planning helps you to make decisions about your final wishes ahead of time, providing comfort to your family and ensuring your requests are met.

Catechism of the Catholic Church 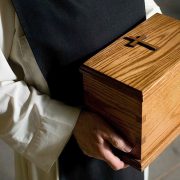 For Trappists, death is understood as a natural part of life. The beauty with which God bestows upon the earth is subject to the burden of time. Seasons change, tides rise and fall, morning light dims with night. Such occurrences remind the monks to reverently regard human life in its own cyclical reality, both as treasured and impermanent. In line with teachings of the Catholic Church, monks believe death is not the end of a life, but a step on the path to a new beginning in eternity.

With a connection to and understanding of this balanced order, Trappists embrace a work of craftmanship working with natural resources. They use the bountiful gifts of the earth, such as wood from trees, to create products for the benefit of others. Self-sufficiency in their work allows the monks to continue their hidden life of prayer.

To maintain sustainability, in 1999 New Melleray Abbey launched Trappist Caskets. Together with lay men and women, the monks help handcraft wooden caskets and urns for families across the county. As stewards and caretakes of the grounds, each wooden casket and urn is made from premium, native wood from the monastery’s own forest, and forests within the region.

One does not have to share the Catholic faith in order to purchase a Trappist casket or urn, but the monks will offer their prayers, as each casket and urn is blessed by a monk. The name of the deceased is inscribed in their Memorial book that resides in the Abbey and a Mass of Remembrance is offered. A memorial tree is also planted to commemorate each life that finds rest in a Trappist casket or urn, a hopeful reminder that with death comes new life.

Prayerful simplicity, quiet fellowship, and the work of human hands are cornerstones for the Trappist monks of New Melleray Abbey. They do not require much of the world outside their walls, but they are humbled to give back during a time of mourning and loss. It is an honor to celebrate the circle of life, whether at its precious infancy, earthly conclusion, or heavenly beginning.