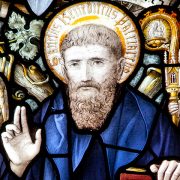 St. Benedict’s Rule for Monasteries (RB) was not the only monastic Rule available in the sixth century, but it was the most livable for people of ordinary strength. From his own experience and from the tradition of Egyptian monasticism, Benedict absorbed the authentic monastic spirit of seeking God in community. He was able to articulate his vision in a Rule that is notable both for its Christo-centric spirituality and its practical organization.

None of this would have made St Benedict the Father of Western Monasticism if it had not been for Charlemagne, the Holy Roman Emperor, and his son Louis the Pious in the ninth century.  They established Benedictine monasteries throughout their empire so as to benefit from the civilizing and unifying energy generated by these monasteries.
The RB provides a satisfying balance of prayer and work (ora et labora) that is amazingly productive.  Benedictines cleared and farmed the land.  In their libraries they copied and preserved manuscripts.  By their prayers they helped convert and pacify the barbarians.   As a result of his influence, St. Benedict is honored as the co-patron of Europe.

In our time, not only monks and nuns but also lay people have discovered the wisdom contained in the RB and are trying to live accordingly.  They adapt to their own situation what the RB says about serving others, especially the infirm, about showing hospitality even to strangers, about maintaining a balance in one’s daily schedule, about reverencing Christ and his word.  They are improving the quality of their life and becoming more fully and perfectly human.